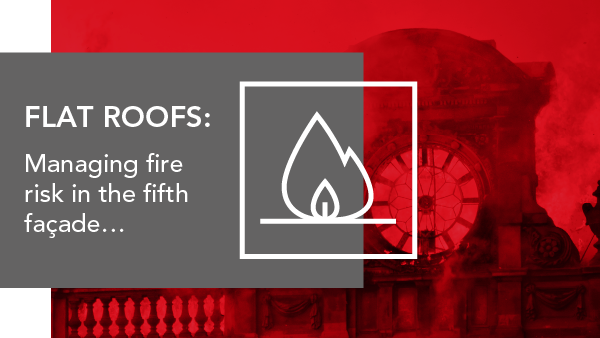 The concept of the roof as the fifth façade, to highlight the increasingly important role it plays in the overall architectural design of the building, has gained traction in recent years.
Primarily driven by Part L of the Building Regulations and the use of insulation to achieve low U-values through the building fabric, the function of the roof has evolved far beyond delivering a watertight structure.  While a recent change to legislation has banned the use of combustible materials
in the external walls of relevant buildings over 18m* (as defined by Regulation 7), this ban only partially extends beyond walls and associated attachments to upstands, balconies and roof terraces – leaving the majority of roofs open to a greater fire risk than the walls.
This fifth façade fire risk is further compounded by common industry misconceptions, specifically surrounding testing protocols and rising confusion between Broof(t4), and the Euroclass reaction to fire ratings for products: A1, A2, B, C, D, E and F. 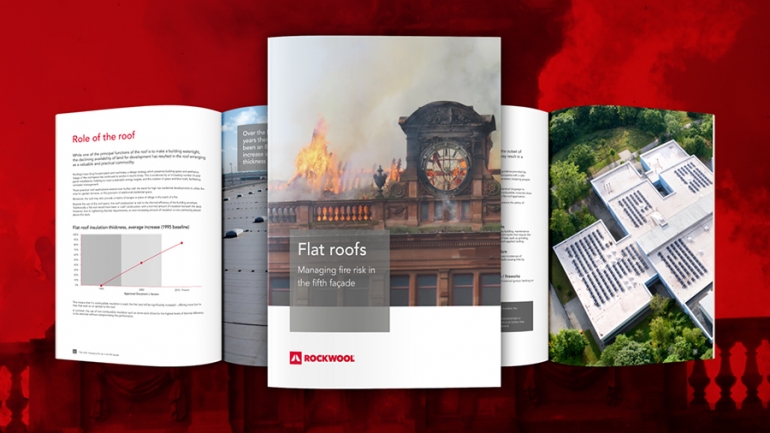 While one of the principal functions of the roof is to make a building watertight, the declining availability of land for development has resulted in the roof emerging as a valuable and practical commodity.
Rooftops have long housed plant and machinery, a design strategy which preserves building space and aesthetics.
Usage of the roof space has continued to evolve in recent times. This is evidenced by an increasing number of solar panel installations, helping to meet sustainable energy targets; and the creation of green and blue roofs, facilitating rainwater management.
These practical roof applications extend even further with the trend for high rise residential developments to utilise the area for garden terraces, or the provision of additional residential space.
Moreover, the roof may also provide a means of escape or place of refuge in the event of a fire.
Beyond the use of the roof space, the roof construction is vital to the thermal efficiency of the building envelope.
Traditionally a flat roof would have been a ‘cold’ construction, with a nominal amount of insulation beneath the substrate or deck. However, due to tightening thermal requirements, an ever-increasing amount of insulation is now commonly placed above the deck.
This means that if a combustible insulation is used, the fire load will be significantly increased – offering more fuel to fires that start on or spread to the roof.  In contrast, the use of non-combustible insulation such as stone wool allows for the highest levels of thermal efficiency to be attained without compromising fire performance.