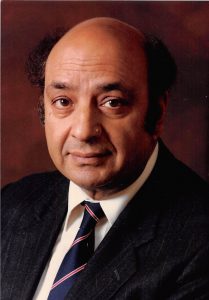 Omkar was the Founding President and is a Governor of WOBO.

He was the Chief Controller of Prosecutions, Law Department, City of Calgary, Canada 1977 – 1997

Omkar Nath Channan was passionate about establishing a world-wide organization that would leave legacy through the pursuit of its purpose, facilitate cooperation and coordination among member nations and promote global initiatives to the benefit of humanity.

He made a submission to the United Nations Non-Governmental Organizations on 24th February, 1987, and at its recommendation the Economic and Social Council of the United Nations, at its full regular session on 19th May, 1987, granted Category II Consultative Status (now known as Special Consultative Status) to the World Organization of Building Officials.

He was Public Member of the College of Medical Diagnostic, Therapeutic & Technologists Appointed under Health Professions Act of Alberta,  for a term of three years effective 2008.

He has held a breadth of positions with diverse responsibilities including being a Member of the Development and Sub-Division Appeal Committees, and the Assessment Review Board of  Rocky View County.  He was Senator Emeritus for the University of Calgary and also currently the President, Calgary – Jaipur Development Foundation (Sister-cities of Canada and India).

Omkar has headed delegations to the Governing Council of the U.N. Centre for Human Settlements, UN-HABITAT.

He was the President, United Nations Association in Canada Calgary Branch, Regional Prairie Vice President, United Nations Association in Canada, (National Board).  Member of the Languages Committee of Olympics and Manager of the Language Services Committee of the Seventh World Police/Fire Games held in Calgary.

Museums of Regiments based in Calgary with the cooperation of the Calgary-Jaipur development foundation displayed a unique exhibit honouring the “The Indian Army, Side by Side with Canada’s Sons and Daughters, 1914 and 1945 World Wars”

He is Vice President of Mental Health Law Association

Omkar is an author of the Comprehensive Digest of East African Civil Law Reports 1896-1954: The Role of the Court Interpreter with a Foreword by The Right Hon. Lord Hailsham of St. Marylebone, P.C., C.H., former Chancellor of the British House of Lords and has presented papers at Conferences and World Congresses.

Omkar was the recipient of ;