WOBO thanks Renewable Energy for the link to the developments relating to renewable hydrogen. 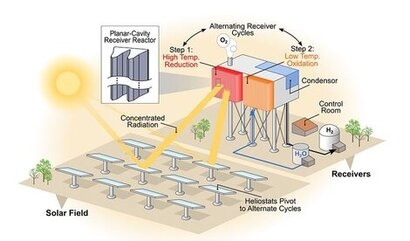 Analysis from scientists at the US Department of Energy National Renewable Energy Laboratory (NREL) have found that perovskite materials may hold the potential to play an important role in a process to produce hydrogen in a renewable manner.

Hydrogen has emerged as an important carrier to store energy generated by renewable resources, as a substitute for fossil fuels used for transportation, in the production of ammonia, and for other industrial applications. Key to the successful use of hydrogen as a fuel is being able to meet the Department of Energy’s Hydrogen Energy Earthshot – a recently announced goal to cut the cost of clean hydrogen by 80% to $1 per kilogram in a decade.

The NREL scientists analysed an emerging water-splitting technology called solar thermochemical hydrogen (STCH) production, which can be potentially more energy efficient than producing hydrogen via the commonly used electrolysis method. Electrolysis needs electricity to split water into hydrogen and oxygen. STCH relies on a two-step chemical process in which metal oxides are exposed to temperatures greater than 1,400 degrees Celsius and then re-oxidised with steam at lower temperatures to produce hydrogen.

“It’s certainly a very challenging field, and it has a lot of research questions still unanswered, mainly on the materials perspective” said Zhiwen Ma, a senior engineer at NREL and lead author of a new paper, System and Technoeconomic Analysis of Solar Thermochemical Hydrogen Production, which appears in the journal Renewable Energy. His co-authors, all from NREL, are Patrick Davenport and Genevieve Saur.  Read more…